Subscribe and get my book! 7 Days to Happy & Healthy Get the book!

Everywhere I take this easy banana pudding with instant pudding, people absolutely rave about how good it is. Funny thing is that it is by far the easiest dessert I have ever made. In fact, this banana pudding recipe has even won the best dessert at one of our church functions several years ago.

There is a slight variation in this recipe that you typically see that adds a creamy, light taste to the pudding. However, my favorite part is by far the abundance of soft wafers in between the layers of bananas and pudding.

Yes, it’s true that no picnic is complete without this Banana pudding with instant pudding, but it’s just as good at a Fall function, including Thanksgiving. This pudding is so delicious, no one will ever say it wasn’t a perfect dessert for any occasion.

I’ve been making this pudding recipe since I was a young mom in my early 20s. I wish I could say I have perfected it over the years but truth is, it didn’t need any adjustments. It’s always been this great.

The recipe is so versatile, you can make it as many layers as your container will fit, or a single layer if that’s what you choose to do. I have made it in a large trifle dish with about 5 layers that was very impressive.

After making this a few times, you can eyeball most of the ingredients as it is almost the perfect throw together dish.

I never measure the vanilla wafers or the bananas, and that’s what makes it perfect every single time.

How to Make Banana Pudding with Instant Pudding

Use a dish that’s approximately 9 x 9 or 8 x 8 and at least 3 in deep. The number of layers you make will depend on the depth of your dish.

In a bowl, whisk together the vanilla pudding mix and 2 cups of milk until it’s thoroughly combined. Let the mixture sit for a few minutes to firm.

Start with making sure your bananas are just beginning to ripen. If they have been browning for a few days, your pudding won’t look as good with browning bananas.

Line the dish with a generous layer of vanilla wafers. Don’t worry too much if you have some that are doubled up.

Next, slice bananas and layer on top of the vanilla wafers. You may use 2-3 bananas, depending on the size of your dish. I like to be generous with the bananas.

The pudding should be firm now. Take the thawed out cool whip and fold into the pudding until well blended.

Then, pour about 1/3 of the pudding onto the first layer in the dish. I like to shake the dish slightly to get the air bubbles out and allow the pudding to settle in between the vanilla wafers and bananas.

Then, repeat the layer twice again with vanilla wafers, sliced bananas and 1/3 pudding.

Depending on your dish, you can alter the number of layers to suit the size.

Store in the refrigerator until ready to be served.

As mentioned above, I like to make the banana pudding at least 8 hours ahead of time to allow the vanilla wafers to soften. 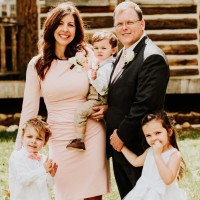 When I am not hanging out with family, you can find me at the barn with my horse.

Previous Post: « Our Hunt for the Perfect Fit Comfortable Jeans
Next Post: 7 Unique Community Service Projects for Others this Christmas »

This site uses Akismet to reduce spam. Learn how your comment data is processed.

Hi, I'm Stephanie, Mom and Gigi! Our blended family consists of 7 kids, 3 grandchildren, 3 golden retrievers and 1 horse. I work hard to efficiently take care of the must-dos to make more time for the want-tos in my life. Keeping a balance between dry shampoo and manicured nails is where I tend to stay. I've learned being healthy is about so much more than eating right and exercising. It's really hard for me to take time for myself without feeling guilty, even now that all of the kids are almost grown. My life and surroundings need to feel organized and put together before I can do things for myself. Healthy for me means my to-do list stays less than explosive mode. Does that make sense? If not, I'll explain later, but for now, know my motto is, "Done is the new PERFECT."

I'm glad you are here, take a moment to say hi!

GET YOUR FREE COPY NOW

I'm finally digging my toes in the sand while watc
Sometimes I have to forget about my goals. Have yo
Someone’s excited for dinner
I hate to be a Debbie Downer today, but this sums
Supplements used to be taboo for me. They sounded
Keeping it real...it's not always pretty, definite
#ChallengeAccepted @nisha.dsa⁠ I did some readin
I learned a long time ago dinner didn't have to be
Throwback to last Fall at the beach...my favorite